Christ’s Tunic is the piece of clothing worn by Jesus during the last hours preceding his death. It was also worn during the Last Supper, the agony of Gethsemane, the arrest at the Mount of Olives, the appearance before the Sanhedrin and before Pilate and finally during the path to Calvary.

Weaved in one piece from top to bottom, Christ’s Tunic is seamless. The Tunic collected the blood from his wounds during Christ’s Road to Calvary. Early Christian communities considered it as a relic of great importance and it was kept in the Orient for several centuries.

“When the soldiers had crucified Jesus, they took his clothes, dividing them into four shares, a share for each soldier.
They also took his tunic, but the tunic was seamless, woven in one piece from top to bottom.
So they said to one another, “Let’s not tear it, but cast lots for it to see whose it will be,” in order that the passage of scripture might be fulfilled [that says]: “They divided my clothes among them and for my garment they cast lots.”
John 19: 23-24

In the beginning of the 9th century, according to tradition, the Tunic was offered by Irene, Empress of Constantinople, to Charlemagne, Emperor of the Occident. He entrusted it to the monastery of Argenteuil where his daughter Théodrade was the Abbess.

The Holy Tunic survived through centuries and French history without ever leaving Argenteuil. It has been continuously revered by clerks, monarchs and the people.

The Tunic is normally kept rolled up in a reliquary in the Basilica of St. Denys of Argenteuil. Traditionally, it is unfolded and shown only twice a century, during a formal exhibit. The last two were held in 1934 and 1984.

What can be done when coming to the exhibit?

Attending the exhibit at the Basilica of St. Denys of Argenteuil, you will have the opportunity to venerate Christ’s Holy Tunic, which is only on exhibit twice a century. He wore it during his Way of the Cross.

For this, a spiritual itinerary will be offered on site:

To help you, a pilgrim booklet will be available, as well as live music and meditation times at the basilica.

You also have the opportunity to participate in the Way of the Cross through the streets of Argenteuil on Good Friday, March 25th, and attend one of the 16 masses planned during the exhibit (see the schedule on the program).

Program for the exhibition of the Christ’s Holy Tunic

Good Friday, March 25, 2016: Stations of the Cross (3pm) followed by the Exhibit Opening, and The Office of the Passion (8:30 pm)
Saturday, April 2 and 9, 2016: Torchlight procession, vigil and night adoration of the Blessed Sacrament (the Basilica will be open all night)
Sunday, April 3, 2016: Divine Mercy Sunday
Monday, April 4, 2016: Feast of Annunciation, Mass at 7pm followed by a vigil prayer to Mary
Sunday, April 10, 2016: Solemn Vespers and closing of the exhibit at 4:30pm.

How to Get Here 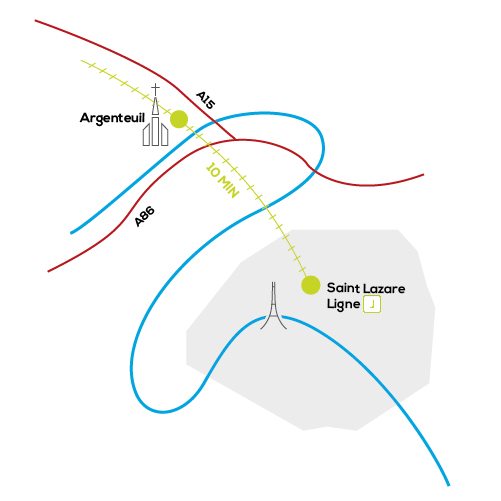